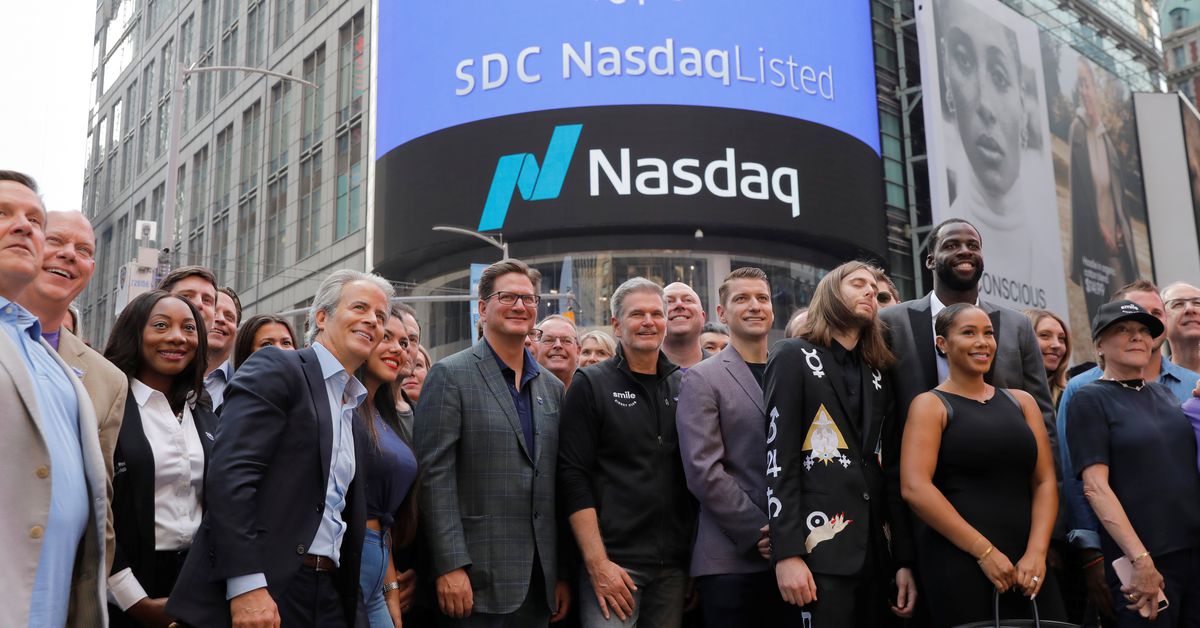 SmileDirectClub celebrates as the company debuts its IPO outside the Nasdaq MarketSite in New York, U.S. September 12, 2019. REUTERS/Lucas Jackson

The company and law firm names shown above are generated automatically based on the text of the article. We are improving this feature as we continue to test and develop in beta. We welcome feedback, which you can provide using the feedback tab on the right of the page.

(Reuters) - A California state dental board should face antitrust claims over the agency's investigation of dental products maker SmileDirectClub LLC, a lawyer for the tele-dentistry company told the 9th Circuit on Monday, in a bid to revive a closely watched lawsuit.

Foley Lardner partner James Dasso argued before a three-judge panel of the 9th U.S Circuit Court of Appeals that the federal judge in Los Angeles who dismissed the company's complaint applied the wrong standard in assessing its claims that the board participated in an anticompetitive agreement to suppress its entry into the market.

SmileDirectClub allows patients to have their teeth scanned by technicians, who are not dentists, and have those scans sent to orthodontists who use them to make clear braces, without seeing the patients directly. The braces are then sent to patients by mail.

"An entire new disruptive model is coming into the marketplace, and that model is being met with resistance by the dental board," Dasso told Circuit Judges M. Margaret McKeown and Jacqueline Nguyen, who heard arguments with U.S. District Judge Royce Lamberth of Washington, D.C., sitting by designation.

"The idea that you can do these things over the internet more cheaply and more conveniently really presents a major threat to the existing dentists and orthodontists," Dasso said.

SmileDirectClub sued the dental board in 2019 in U.S. District Court for the Central District of California, accusing it of pursuing an "aggressive, anticompetitive campaign of harassment and intimidation," against it and alleging violations of the Sherman Act.

The lawsuit came just a few weeks before state regulators initiated a civil administrative disciplinary proceeding against Jeffrey Sulitzer, chief clinical officer at SmileDirectClub and a named plaintiff in the lawsuit against the board. The state accused Sulitzer of violations of the state Dental Practice Act, including aiding and abetting the unlicensed practice of dentistry.

On Monday, McKeown questioned California's lawyer about whether the plaintiffs were required to plead, as U.S. District Judge George Wu concluded, that an improper regulatory motive was a necessary threshold for an antitrust claim.

"That, in my mind, is not the standard in terms of what would need to be pled at this stage," McKeown said.

Sharon O'Grady of the California Attorney General's Office responded that was not a "fair reading" of Wu's ruling.

"I think the district court just said here there is nothing more than what you would see with an agency engaging in its normal enforcement activity," O'Grady said.

The dental board has done "its duty to investigate a violation of California law," O'Grady said. "The board is enforcing California law within California borders. Before a dental patient is treated with something that can have serious health effects, they do need to be seen by a dentist."

Andrew DeLaney, a lawyer for the U.S. Justice Department's antitrust division, appeared Monday as a friend-of-the-court in support of neither side, saying DOJ was "concerned about the district court's opinion."

DeLaney said the ruling reflected a "misunderstanding" that the California board could not be sued for an alleged antitrust violation because it acted consistently with its regulatory purpose.

For Tippins: Sharon O'Grady of the California Attorney General's Office